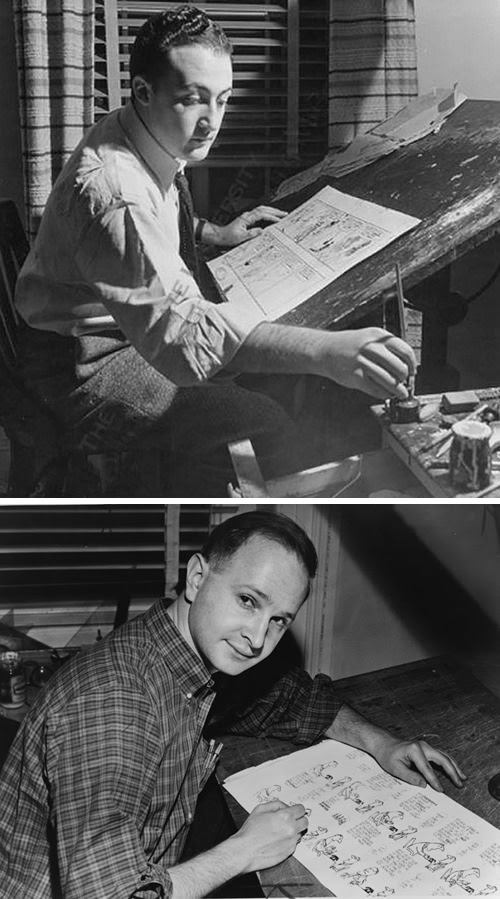 Will Eisner (1917-2005) innovated and pioneered comics in two different eras. Eisner helped invent the comics industry in the 1930s and created The Spirit in the 1940s as a heroic crime-fighting figure who appeared in a Sunday newspaper comics insert. The Spirit walked through a world of noir-inflected, urban drama, one suffused with humor and insight into the human condition, a world not afraid to essay the occasional Yiddish in-joke or Bronx social drama vignette.  Then after producing comics for training and education, Eisner, in 1978, re-invented himself―and the medium of comics―with his first graphic novel, A Contract With God, followed, until his 2005 passing, with many additional graphic novels and textbooks.

From 1946 until The Spirit’s end in 1952, Eisner counted as part of his close-knit, talented staff, a precocious teenager named Jules Feiffer, who worked on The Spirit and Clifford for Eisner, and also took on the self-appointed role of Eisner’s social conscience and resident smart-ass. In the years since, Feiffer’s own multifaceted career as satirical cartoonist, screenwriter (Carnal Knowledge), playwright (Little Murders) and children’s book author (The Man in the Ceiling)―and most recently, creator of his own trilogy of graphic novels (so far Kill My Mother and Cousin Joseph have been released, with the third volume in the works)―has blossomed in a unique and spectacular manner. But he did get his start with Will Eisner, with whom he was friend and colleague―and admirer―through the rest of Eisner’s life.

Jules will speak about his experience working for Eisner, what he learned from him and how Eisner influenced his own work, and why Eisner, a century after his birth, is still an important figure in the past, present and future of comics and graphic novels and in our culture as a whole.

Jules will speak and present via Skype, and will be joined by in-person panelists, including Paul Levitz (author of Will Eisner: Champion of the Graphic Novel) and Danny Fingeroth (co-editor of The Stan Lee Universe and Chair of Will Eisner Week).

The 182nd meeting of the NY Comics & Picture-story Symposium will be held on Tuesday, March 28, 2017 at 8pm at Parsons School of Design, 2 West 13th Street, in the Bark Room (off the lobby).