Blutch on A European Education 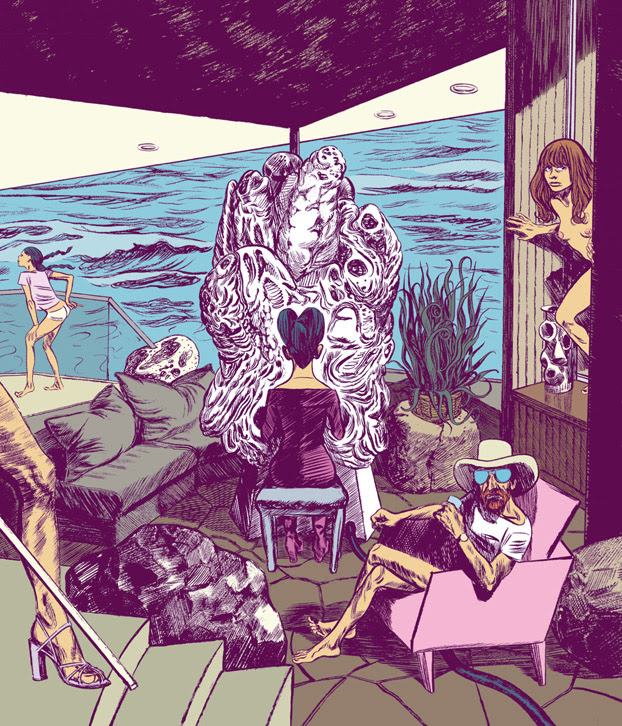 “I am currently working on a book called Variations (Dargaud, September 2017), where I recreate a series of famous graphic novel sequences by great masters of European comics. This work forces me to ask myself questions regarding the ambiguous nature of sequential art.  Neither literary nor plastic, it is what Harold Rosenberg, referring to painting, once defined as an anxious object. How do we decode it? Where does it stand in our society? A graphic novel can receive a Pulitzer, cartoonists’ work is exhibited in great museums while the art establishment is still indecisive on weather to consider it a minor or a major art. Personally, I call my work ‘paradoxal literature.’  The pages that compose Variations follow each other with no beginning or end. Just fragments of stories that allow me to reach what I feel is hidden somewhere beyond the boundaries of my storytelling: sequential art as a brand new form of poetry. That is, a form of literature ‘to observe.’ Sculpted literature.” – Blutch

Born in Strasbourg on 27 December 1967, Christian Hincker, otherwise known as Blutch, obtained a degree in illustration from the Decorative Arts College in his hometown. Later, his drawings embellished the columns of Liberation, New Yorker and Inrockuptibles, a huge sign of success in the industry. But above all, he wanted to produce a graphic chronicle of daily life and its turpitudes. His works resembled thumbnail reports in which the characters of a comic tragedy become bogged down with far-fetched and fantastic digressions in the mirror.
He put his early youthful indiscretions into cartoon form in Fluide Glacial from 1990 onwards and collated them all in one album entitled Waldo’s Bar (Audie, 1992), which was soon to be followed by Mademoiselle Sunnymoon and then Blotch.

While continuing to regularly enrich the contents of these prestigious humorous cartoon-based magazines, he found his way into many small independent publishing houses which were starting to become well-established. The magazine Lapin featured stories which were to become Sunnymoon, tu es malade (Association, 1994). Cornélius published Lettre américaine (1995), followed by the series of booklets entitled Mitchum.
His contribution to the monthly A Suivre in 1996 marked the recognition of his very specific style, demonstrated in a powerful black and white production. In this, he presented a large section of Peplum, a homosexual tragedy based on Satiricon by Petrone, the uncut version of which was presented by Cornélius in 1997 (published in English by New York Review Comics, 2016). From that moment on, Blutch never hesitated to tackle controversial subjects.

In 1998, he produced Rancho Bravo for Audie, in collaboration with Capron. At Editions du Seuil publishing house, he illustrated texts by Hortense Dufour (Charivari, Melle Noémie), H. M. Enzensberger (Les Sept voyages de Pierre) and Fabio Viscogliosi (Le Pacha). His work was also to be found in Alain Beaulet publications (Le Cavalier blanc, n°2), as well as La Présidente, with J. C. Menu, in the collection Noire est la Terre and Brüsel (Piccoli).
After systematically using all black-and-white resources, Blutch adapted his expressionist work so as to profit from the support of the colorist Ruby in Vitesse moderne (Dupuis 2002, Europe Comics in English in 2017), exploring an almost fanciful Paris, haunted by stray creatures and shadows which you could swear were real even though they were only part of this unclassifiable creator’s fantasy.

Blutch collaborated with Jazzman magazine from 2000 to 2004, which resulted in the creation of Total Jazz (Cornélius). For Futuropois he wrote Bonheur, Volupté and Beauté between 2005 and 2008. He also worked with Alain Resnais (posters, graphics) and occasionally took on acting in a number of films.
In 2011 he released Pour en finir avec le cinema with Dargaud (So Long Sivler Screen, PictureBox 2014, Europe Comics 2017).
In 2014 Blutch released the totally surreal Lune l’envers (Dargaud 2014, Europe Comics 2017), which deals with an author suffering from writer’s block, buckling under the weight of self-doubt and daily responsibilities.

Playful, surreal and poignant, Blutch is undoubtedly one of the most prolific and challenging authors of our time.

The 183rd meeting of the NY Comics & Picture-story Symposium will be held on Tuesday, April 4, 2017 at 7pm at Parsons School of Design, 2 West 13th Street, in the Bark Room (off the lobby).