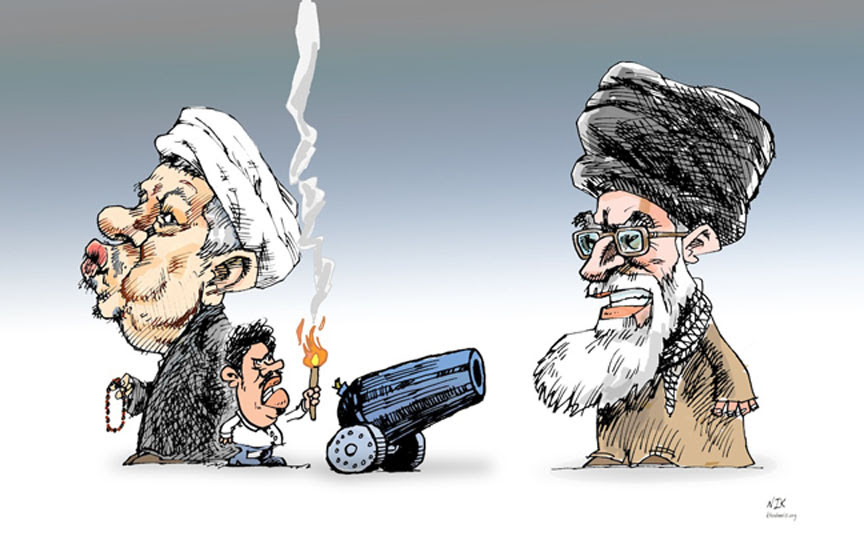 Nik Kowsar is an Iranian-Canadian cartoonist, journalist, and blogger, currently living in Washington DC, US. Kowsar was also a reformist candidate for the second term of city council of Tehran in 2003, an election won by the conservative candidates of Abadgaran.
He studied Geology in the University of Tehran, and joined Gol-Agha, an Iranian political satire magazine as a cartoonist in 1991. He worked forHamshahri from 1992 to 1998, and was a member of Newspapers such asZan, Aftab-e Emrooz,  Sobh-e Emrooz,  Akhbar-e Eghtesadi,  Azad,  Bahar,  Bonyan,  Doran-e Emrooz,  Nosazi,  Hayate No,  Abrar-e Eghteadi,  Hambastegi,  Farhang-e Ashti. Most of these papers were banned by Saeed Mortazavi. He was arrested in Feb. 2000 for drawing a cartoon and spent 6 days at the Evin Prison in Tehran.
Kowsar has been sentenced to prison for his cartoons in absentia. After moving to Canada, he worked in a dry-cleaner’s for a while before joining MarketWire in 2005 and IFEX in 2008. He also has been free-lancing and his cartoons have been recently published by The New York Times, The Washington Post, The Globe and Mail, Maclean’s, and The Guardian. Kowsar is a member of the New York Times Syndicate. He has appeared on CNN, BBC, CBC, CTV, VOA and many political TV shows as a guest analyst and observer. Kowsar now works in Washington DC and is the editor-in-chief of Khodnevis.org, the first Persian citizen journalism platform.
Kowsar is a member of the board of directors of Cartoonists Rights Network International.
Kowsar is also a member of the Association of Canadian Editorial Cartoonists (ACEC) and Journalists in Exile (JEX). CBC made a documentary based on his life and his involvement in the Blogger movement.

The 126th meeting of the NY Comics & Picture-story Symposium will be held on Tuesday, Sept. 8, 2015 at 7pm at Parsons The New School, 2 West 13th Street,in the Bark Room (off the lobby). Free and open to the public.