The 192nd meeting of the NY Comics & Picture-story Symposium will be held on Tuesday,  Sept. 19, 2017 at 7pm at Parsons School of Design, 2 West 13th Street, in the Bark Room (off the lobby). Free and open to the public.

From the Funny papers to Freud: Martin Wilner’s Artistic Journey
Martin Wilner will trace the unusual arc of his work from learning to draw from comic books and strips in grade school to becoming a psychiatrist and a widely exhibited visual artist. He will describe his ongoing drawing projects and an existential work process that draw upon the techniques of psychoanalysis in a highly original manner without losing sight of his vicarious tutelage at the hands of the comic art masters.
Copies of his Freud Museum London monograph, Martin Wilner: The Case Histories  will be available for purchase at the talk.

Martin Wilner is a visual artist and psychiatrist. His art has been exhibited and published internationally and is included in many prominent public and private collections including the Whitney Museum of American Art, the Los Angeles County Museum of Art, The Morgan Library and Museum, and the Jewish Museum. He recently had his first one person museum exhibition at the Freud Museum London and has been included in numerous museum group exhibitions including Embracing Modernism: Ten Years of Drawings Acquisitions at the Morgan Library and Museum, Reinventing Ritual at the Jewish Museum, and Making Contact at the New Museum Los Gatos. He has lectured on his work process at the Drawing Center, the Freud Museum London, SXSW, and the Payne Whitney Clinic at Weill Cornell Medical College. 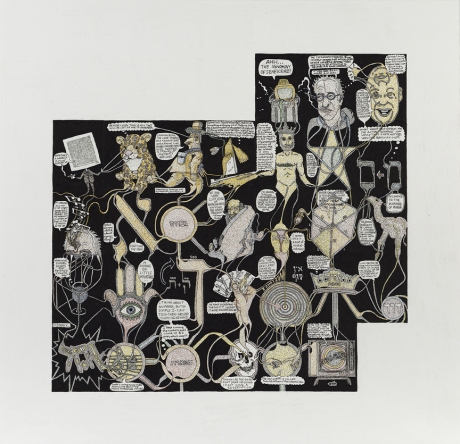